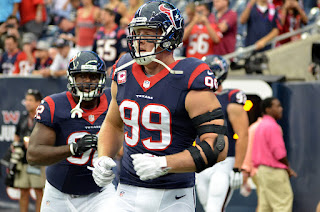 JJ Watt has stayed healthy so far in 2018 and it's paid dividends for the Houston Texans, winners of four straight after starting the season 0-3.

Reasons: The Dolphins started the season 3-0 and fools lined up to celebrate a team other than New England winning the AFC East for the first time in what seems like decades. Not so fast my friends, Lee Corso would say, because the Dolphins have since gone 1-3 since then and now sit as the worst team in the NFL by far with a winning record. Miami ranks in the bottom 25% of the league in both yardage metrics and points scored; they rank 18th in points allowed (25.3 ppg). The only thing the Dolphins do well is ball hawk; they rank 1st in INTs, which might come into play against the second-year quarterback Deshaun Watson, who has been running for his life all season. Speaking of the Texans, they’ve trended in the opposite direction of the Dolphins, winners of four straight after starting the season 0-3. The offense has crept towards mediocre while the defense, ranked 8th in PA (20.6 ppg) and 9th in total defense, has begun to play like the Texans defenses we’ve come to know, or better put, have played to their talent level, especially getting after the quarterback, where they rank 8th in sacks. The Texans are hot, playing well on defense and are at home. This should be a no-brainer, but I don’t like spreads of touchdowns or more with unproven teams, especially on Thursday Nights.


Reasons: Word on the street is several defensive players from the Jaguars got arrested at a nightclub in London after getting into a bar brawl over a $60K bill. If that’s true then Jacksonville has even less of a chance against the returning Super Bowl champions, especially with the Eagles fresh off giving up 21 4th quarter points to the Carolina Panthers to lose 21-17 after leading 17-0 going into the 4th quarter. In other words, the Eagles could be looking to take out some frustration on a group of Jaguars clearly licking their wounds. The home team Jaguars could be in trouble in front of the home crowd on their home pitch Sunday. That’s a Shahid Khan joke.

Reasons: The last time the Broncos faced Wonder Boy Patrick Mahomes and the high-flying Chiefs they made Kansas City look like a normal team…for a half. Then Patrick went Mahomes on Denver in the altitude at Mile High and proved that the Broncos AFC West run was indeed over. That game was in Denver. This game is in Kansas City. I normally don’t like 10-point spreads, but when I do, it’s for the Chiefs facing Denver at home in the toughest place to play in the NFL.

Reasons: The last time these two teams faced each other they played to an uninspiring tie opening week, the first of a few ties to start the 2018 NFL season, and not much has changed for either team since. The Browns have played in a million OT games and the Steelers have been wading in mediocrity and team drama as Le’Veon Bell continues to play with their money and their emotions. The weather also remains the same, although that won’t bother either of these teams. Rookie Baker Mayfield (6 TDs; 5 INTs) has had an up-and-down season, which will likely continue Sunday in Pittsburgh, but Mayfield is no punk, and he’d love the chance to get that elusive win against the Steelers on the road, so those eight points are almost an insult. 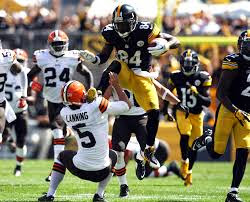 Antonio Brown is as capable of jump kicking his own team as he is his opponents, but the Steelers aren't the same team without him.

Reasons: The Giants are imploding before our very eyes and have just traded off the remaining quality players on defense other than Olivier Vernon, so imagine the disrespect Washington feels being one-point favorites against these 1-6 Giants after going 3-1 in their last four against quality competition (GB, NO, CAR & DAL) and leading the NFC East. Blame it on history, but if we’re talking history, these Giants might be the worst Giants team in their history.

Reasons: The take home message with these two teams is they’re both better than we thought they’d be before the season or even a few games into it, yet something has to give. Essentially, we have one of the better offenses in the league taking on one of the better defenses in the league, the latter of which is traveling across the country to play in a 1:00 game. Las Vegas says they’re even, which the aren’t, but under the transcontinental circumstances they probably are.

Reasons: Well, it’s not prime time so the Bengals have a chance. Featured in this match up are two of the league’s worst defenses, hence the ridiculous 54-point O/U. Of the 13 combined games these two teams have been featured in nine have breached at least 50 points and the remaining four have had combined scores of 44, 48, 48 and 49 points. I’m fascinated by the surge of points and touchdowns, specifically in relation to the over/under, in which 50 is a relatively high number. Week 8 features six games with 50+-point O/Us, making that the fifth week in a row with at least four games with such O/Us. The NFL says the fans want more points, so tune in for this game if that’s the case. Bring an umbrella.

Reasons: This game features one of the leagues best defenses (CHI) and good defenses (NYJ) against offenses that have crept up on us at times in the 2018 season. Combine that with the potentially awful weather and we have a potential dud here. Don’t necessarily trust me when it comes to the weather, but do you trust Mitch Trubisky enough to give the Jets over a touchdown? I don’t, although it’s getting harder not too. 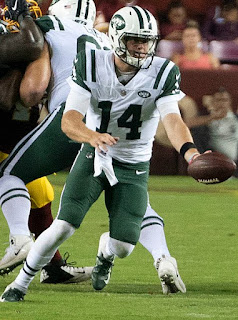 It's been an up-and-down season for the rookie Sam Darnold, the 3rd pick in the 2018 NFL Draft, but lucky for him Khalil Mack is questionable.

Reasons: Talk about a clash of titans. This game not only features two of the better defenses in the NFL, but two of the biggest egos, between Cam Newton’s and the one possessed by the Baltimore defense and Ravens head coach John Harbaugh. The Ravens are coming off a devastating loss to the Saints after Justin Tucker missed the tying PAT, while the Panthers are coming off a miraculous win of sorts last week after they came back down 17-0 in the 4th quarter against the Philadelphia Eagles to win 21-17. Seems to me the Ravens are still hungry while the Panthers might be feeling a little blessed. That’s a bad combination, one that’ll likely have Sour Cam out for the post-game presser.


Reasons: Only a matter of time before Chucky trades himself out of Oakland, right?

Reasons: This is the kind of game where Aaron Rodgers is so miffed about being the largest underdog of his career that he single-handily takes the Packers and puts them on his shoulders and wins the game against the Rams. Wait, that’s what Rodgers does every game, hence the 9.5-point spread. The Packers absolutely suck, despite their confusing defensive metrics, which make them look good on paper. No, Green Bay is a one-dimensional team in that Rodgers is their one dimension, assisted by All-Pro wide out Davante Adams. The Rams, conversely, are as far from one-dimensional as a team could get, although one could argue the Rams are truly one-dimension – they line up and smash you in the mouth with an All-Pro offensive line and an All-Pro running back in Todd Gurley, who is my mid-season candidate for runaway MVP. Las Vegas doesn’t get much wrong, so if they say the Packers suck relative to the Rams, I believe it. 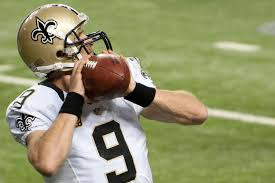 Drew Brees quietly has the New Orleans Saints sitting at 5-1 in the midst of another MVP-caliber season..err...career.

Reasons: The Vikings seem to have righted their war ship just as the seas got really rough, which is good considering the best team in the NFL still under the radar sails into Minneapolis Sunday Night for the Game of the Week and Drew Brees is on a mission. Let’s see what Everson Griffen has to say about Brees staying lit in Minneapolis, because he’s back on the team after dealing with mental health issues, and it was pretty clear the Vikings weren’t the same team without him. They could be without Xavier Rhodes Sunday night, which could be a huge problem, but if Rhodes is a go I wouldn’t expect the Saints to be firing on all cylinders in the chill like they have been all season indoors or in great weather and winning their fourth road game in five weeks.

Reasons: Here we go again, the Bills and Patriots involved in spreads of two or more touchdowns. I hate touching these games, because it seems so obvious to not pick a team favored by egregious amounts of points, as the Bills have proved already on the road this season, and it would be an especially bad idea to bet those points against the home team…right? Well, every time I bet against the Patriots in similar spreads I get burned. The Patriots are on fire offensively and the Bills couldn’t score when their quarterback situation wasn’t a nightmare, so all signs point to the Patriots destroying the Bills in Buffalo. Then you have to consider the history of these to teams and the fluky past they have when it comes to home and away match ups between the Bills and Patriots. Normally I’d never pick the Patriots to cover 14 points at Buffalo at any point in the season, but these particular Bills at this particular point in the season are particularly bad.